Are you a risk-taker? I am.

The story of Jesus walking on water is no doubt one of His most widely known miracles. But did you know that Peter also walked on water? 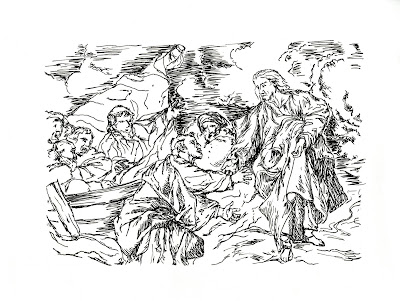 The story as Matthew tells it in Chapter 14 comes after the miracle of feeding the multitudes with 5 loaves of bread and 2 fishes and Jesus sends the disciples ahead in a boat while he goes up onto a mountain and prays. I've heard a message by a pastor about the context from these details, being that Jesus was able to see the boat on the water from the mountain vantage point and so they were still under his "protection." It makes sense.

So, the waters get choppy and then during the "4th watch", super late in the night, like 3am or later Jesus appears on the water and they get scared thinking He's a ghost. Jesus says "Be of good cheer, it is I, be not afraid." And then Peter, says, "Lord, if it be you, then bid me to come onto the water."

First, you gotta know a little bit about Peter. He's the overly zealous one. He's always excited to serve Jesus and usually winds up pulling some sort of proud blunder in the process. When the guards were coming to take Jesus away to present Him to Pontious Pilate before the crucifixion, Peter cuts off one of the guard's ear and Jesus has to put it back on and heal the guard, and then tells Peter that this is what is supposed to happen and to let them take Him away... but overall Peter gives all the right answers to Jesus questions and winds up with the keys to Heaven, even though he denied knowing Jesus 3 times before the cockcrow. It all makes for a really wild story when you study Peter throughout the Gospels.

Anyways, Peter says "If it's you call me out on to the water." And so Jesus does, He calls Peter out to Him. Peter gets out of the boat and lo and behold, he's walking on the water! Don't forget, it's super-late at night and the waters are choppy and suddenly something soaks in and Peter looks at the water and takes his eyes off Jesus and he begins to sink. Of course, he cries out "Jesus, save me." And so Jesus reaches out to him and brings him up from sinking and says to Peter "Oh yea of little faith, wherefore didst thou doubt?" And they get back into the boat, the winds calm, everybody recognizes Jesus' divinity and worship Him and they head to shore.

Often times this story is portrayed as the pentultimate story of having faith and "if you get out of the boat, you can walk on water" and celebrates the power of faith. But obviously, those people haven't really stopped to look at the details of the story. It's really a "careful what you wish for" kind of story. "wherefore didst thou doubt?' Jesus asks, and SOOOO many people will say that it was when he took his eyes of Jesus and when he looked at the water. How about when he said "Lord, IF that's you call me out onto the water." After Jesus said, "Be of good cheer it's me, Jesus." That's when he doubted. And so Jesus used the walking on water as a sign to confirm His identity to Peter.

I know that the whole idea of Jesus and God and miracles takes on a very difficult type of comprehension for our sense of wanting to make sense. The "mystery" of God isn't cool MOST of the time when you want to understand what the meaning of life or what it is that you're "supposed" to do with your life... it's so... mysterious. hahaha! and so we say out to God, "Show me a sign" and we prod some sort of prayer of confirmation or understanding and most of the time it seems to go unanswered and we continue to grope in the darkness of our doubt for some sort of clue or sign to move on. I get that too. We all get scared. I just found out some of my own biggest heroes don't know what to do all the time, even though they are the most "in demand" practitioners of their skills... that's comforting. But true strength doesn't come from knowing the weakness of others, it's only a form of measurement. Have "I walked on water", yes... I've "flown on the backs of eagles"... I've stayed up all night and had my Winters... Looking back, I don't think I like it. Is it worth it then to live through these times? Without a doubt!!! Spring doesn't look all that fun, but it is pretty and full of joy, even though there's lots to do and there are growing pains, it's not miserable and scary like Winter or the 4th watch though...

I hope that this brings some sort of wisdom to you. I hope that this helps you decide whether or not you should hold on or let go. I hope that you recognize Jesus whether it's when He says it's Himself or when you cry out for Him to save you. Go ahead and be a Peter :) or stand firm on the promises in the Word of God.

If you'd like a print of this picture, then send me an E-mail: cityzenart@hotmail.com
Posted by cityzenart at 3:36 PM