who's turn is it anyways? 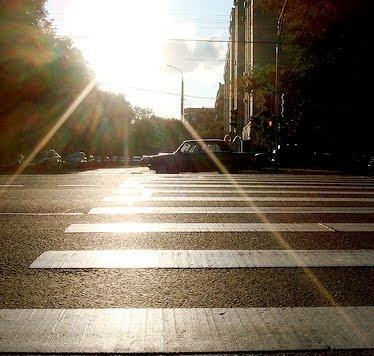 If there were a movement that advocated J-walking, I very well might be the President. I see no point as a pedestrian on waiting for a light to tell me when to cross the street. Sesame Street did just fine by saying look both ways and cross if no cars are coming... Even more, I cross in the middle of the street rather than at intersections, due to the traffic being in one or two directions rather than the four or more of some intersections. I actually hide behind cars and dart out after the car has passed, just so they don't get some crazy idea to change what they're doing and by some stroke of benevolence, let me cross and break up the whole efficiency of the traffic.

You see, there are two laws of transportation: Mobility and Armor. When you have more of one, the less you need of the other. It could stand to reason that a tank and bicycle would easily avoid harming one another due to the extreme nature according to these laws.

All of this is actually a rabbit hole off of my actual point I sat to write about today. I often times insist to drivers, when I am at an intersection, that they go. One because of said laws, as a pedestrian, I simply do NOT want to be in front of a car, and besides the 5 seconds it takes to get out of my way by going first, is much less than the 20-30 seconds it would take for me to get out of their way by crossing in front of them. I can often be found on street corners yelling at stopped cars that are trying to be polite, "GO DAMMIT!!! The light is GREEN!!! It's YOUR TURN!!!" arms flailing! pointing at the lights, and jumping up and down like a nut! 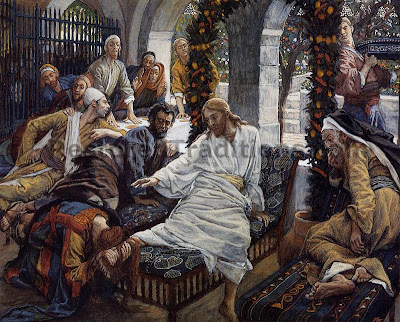 Today, in Sunday school, we prayed over a text. It was about Mary washing Jesus' feet with a pound of pure nard (worth a year's wages) and Judas outraged at the act, because it could have been sold and the money distributed to the poor (Judas also was the money-keeper and would often dip into the till for his own purposes; he was a thief). Jesus replied that "they will always have the poor, but you will not always have me." I heard in Jesus' reply a command to be who you are and mind your own duty... this was Mary's behaviour, and this was Judas' behaviour, and this was Jesus' behaviour. Each person was playing the part of who they were. Mary the devout lover, Judas the selfish, Jesus the teacher... even Martha is mentioned as cooking, and Lazarus as Jesus' friend. Each person, being who they always are expected to be...

As I began to think about Judas, I realized that getting frustrated at people who seemingly are wasteful and inefficient, maybe they are doing something I just don't understand. When it's my turn, it's MY turn. So I'm going to try it. I'm even going to go so far as wait for the light to change before I cross the street (highly unusual in Chicago, but ??? I said I'd try) and go when people give up their turn for me. I'm really curious to see what difference this makes in my life.
....Well, it's a week later, aaaaaaand not J-walking at all is harder than it sounds. My friend Mady was supportive the first couple of times we crossed the street, but I kinda of lead on that it wasn't a big deal and we should just cross. Not sure if I'm going to continue this, although I did take my turn when cars offered me passage.

Posted by cityzenart at 5:04 PM

Email ThisBlogThis!Share to TwitterShare to FacebookShare to Pinterest
Labels: written