Notes From the Underground

Dostoevsky's "Notes From The Underground" was conceived and executed as one magnificent satirical parody of Nicolai G. Chernyshevsky's, textbook of behavior for the younger Russian generation, called What Is To Be Done? (1863). What Is To Be Done? follows rational theory of man is innately good and amenable to reason. "Notes..." attempts to undermine these doctrines from within by ridicule by imitation. Dostoevsky's Underground Man follows that man is evil, irrational, capricious and destructive and not by reason but only faith in Christ could ever succeed in helping him to master the chaos of his impulses. Man's greatest self-interest is to do exactly as he wants: it is his freedom to act against his own self-interest if he so chooses and Dostoevsky further proports the notion of humankind's most capricious whim is dearer to him than any rationally prescribed "self-interest".

I follow this article with an explanation of game-theory; and it is this thread of thought that influences my current series of drawings "Notes From The Underground: A Middle Age Dissadent". Images of labour, political scenarios and social dilemmas that emphasize the context of our dissent from organized cooperation in the face of self-interest despite the end result being a sabotage of long-term advantage. 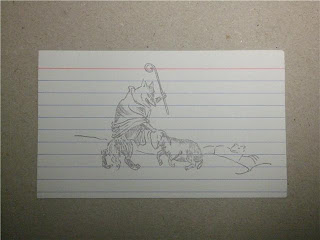 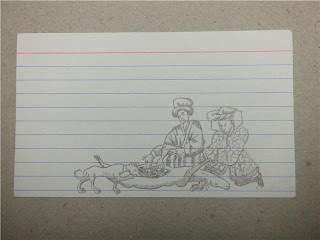 Posted by cityzenart at 3:25 PM

Email ThisBlogThis!Share to TwitterShare to FacebookShare to Pinterest
Labels: written